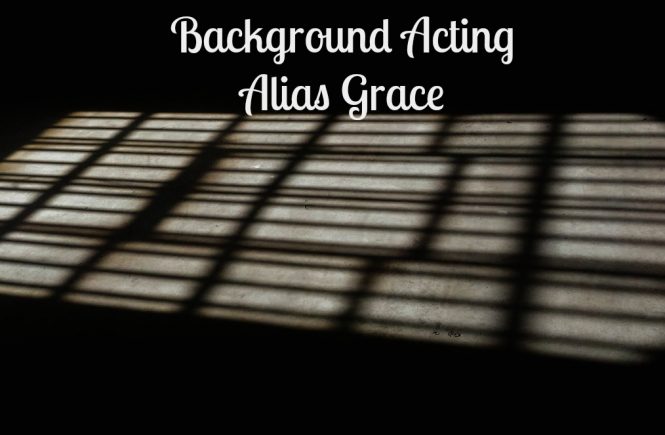 I was lucky enough to spend 3 days as a background actor in a mini series filming here in Kingston.

Emma and I attended the casting call in late September for Alias Grace – a 6 episode series being distributed by CBS and Netflix.  I think it’s going to be shown on CBC but I’m not sure.  Keep an eye on my social media as I’ll be sure to post when I find out when we can watch it!

Update: Alias Grace is now on Netflix!  You can stream all 6 episodes and keep your eyes peeled for me!

Sadly I can’t share any of the pictures I’ve taken – yet – or any scene details.  Once the mini series airs I can post whatever I like, but then the mystery is gone, you know?  Oh how I’m suffering for my art…

But I’m sure you’re reading this to hear about what went on behind the scenes, am I right?

Let me fill you in on how my few acting days went! 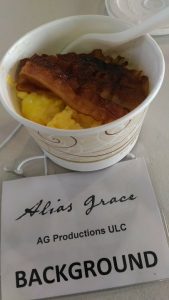 So this acting job actually paid me! It was a whole $12.25 per hour, but they fed us also.  I actually couldn’t get over how much food there really was to eat.  I knew they were offering “lunch” but what I didn’t know was that we’d be fed about every 3 hours.

We got scrambled eggs with either bacon or a sausage every morning.  Mid morning snacks were chili, a hot dog, and lasagna.  The actual lunch (which is served 6 hours after the crew starts working, regardless of what time us background folk had to arrive to be all suited up) was a delicious food truck with options and TONS of food!  As non-union extras we ate last, but that really wasn’t a big deal.  There were some of all the options left by the time we got to eat.

If you follow me on Instagram or Facebook you would have seen the delicious lunch I got the first day.  Striploin steak with gravy, garlic mashed potatoes, balsamic mushrooms, some salads and dessert.  Wow!  I was so full I almost busted out of my corset!  The picture I took wasn’t so great, but it still conveyed the sheer amount of food.  And the another actor was lovely enough to allow me to sample the jambalaya – shrimp, scallops and mussels – that she ordered, in exchange for a chunk of delicious steak.

So here’s how the notifications played out:

I got an email right after the casting call (on Oct 1) that said thanks for coming out – we’ll be in touch – type thing.  And then two weeks later Alias Grace emailed again and basically said nothing – “Thank you again for coming out to our casting session in Kingston.  No decisions have been made yet for the show Alias Grace as we are waiting for the exact schedule for the 5 days November 7-11.  So we will let you know as soon as possible.”  Then on Oct 24th I got “You’ve been selected”!!  Yay for me!  But Emma had not been chosen as they were not using kids after all.  That was a bit sad.

So then we went back into a waiting game.  I didn’t know what days they wanted me for that week so I couldn’t even discuss the time off with my boss.  All the waiting didn’t sit well with me – I like to have a game plan at all times!  I did write them back to confirm that they were not using children as they never emailed that to the address I provided for Emma.  But because I did email them I was given my days for filming sooner than everyone else.  That made me happy.  And so I could book the time off work.  Yay!

So many emails – that all need replies!

On the 27th I got the official “You are an inmate” email that said for sure I was in for the Tues and Thurs with a possibility for Friday.  I took the whole week off, except for Monday.  Then I felt ready to go – in the clear for whatever they had in store for me! 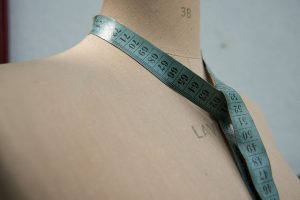 The 28th of Oct I got another email about scheduling a fitting from the 31st to Nov 2nd.  Confirmation that my day and time was Halloween happened on the 29th, although I had to clarify because my attachment was empty.  I found out my time on the 30th.  Good thing they were holding that downtown at the Four Points – I just took a longer lunch and got fitted (while in my Halloween costume!)  We got paid 2 hours for the fitting.  Not too stingy – I think I was there for about an hour overall.

And the confirmations – YES I will be there!

Another email came on Nov 4th to confirm (one of many confirmation emails) that I was good to go for Tues, Thurs and potentially Fri – I had to reply and say “Yes.” Then the Monday night before I had to be there on Tuesday, at 6:30pm I got the email outlining parking, call time, and other bits of info I’d been waiting for.  And the call time was 5am – be there 15-20 minutes early.  Ick!

Every night before having to arrive the next day we’d get an email with our next day’s call time that we had to reply to for confirmation.  Thursday night they didn’t finish shooting (it was an outdoor street scene that I wasn’t in) until 1am so they had called me earlier in the night to see if I could come for sure Friday – and that the call time would be emailed late that night, but it wouldn’t be an early call time.  It’s amazing how late they leave everything.

And finally on set – how exciting! 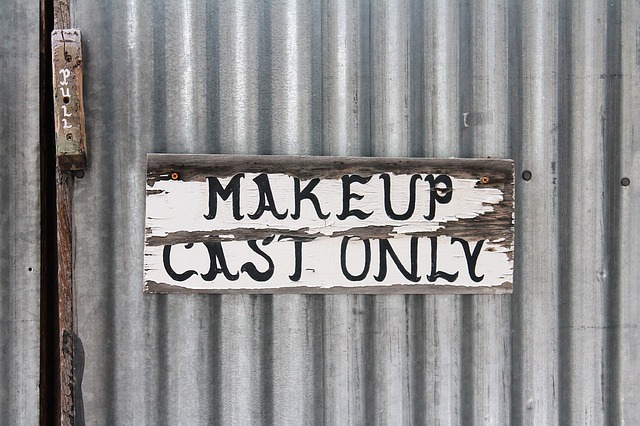 4am rolls around on the Tuesday and I get up, have a coffee and quick breakfast and head out the door.  I knew there’d be coffee and snack options at the set.  Once I got there and parked (at the front of Kingston Penitentiary’s parking lot) I took a shuttle into the depths of Kingston Pen.  I had never been in there before.  There are a lot of buildings!  We went into what I think of as the “main” building – the one with the double staircase that leads to the upper story.  Our “Background Holding” was up the stairs to the right.

Then we had to all sign in and take a seat at the tables provided.  There were a lot of us the first day – maybe 75 or so.  Once wardrobe was ready we all queued up at the back of this huge room to get our outfits.  There were some change rooms, but since I had worn leggings and a tank top I just changed out with the tables.  We were shooting outside so layers worked well. 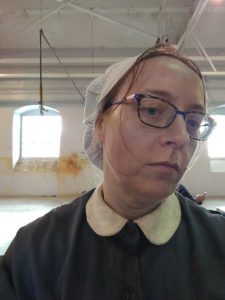 After we were dressed we lined up for hair and makeup.  It sounds glamorous but it was really some simulated dirt smeared on our hands and faces, and then hair pinned up inside our bonnets.  And if your hair was too clean (they said don’t wash it) they’d apply coconut oil to help grease you up.  I only had to have that done the last day because – let me tell you – you need to go home and wash once you’re done.

I almost forgot to mention – once you were fully dressed and makeup complete they took you into a back room and sprayed muddy looking water on the bottom of your outfit.  We had aprons over our canvas dresses and they made us all look different levels of dirty.  It’s amazing how much work goes into just the background work in these big productions.  It was very cool to see firsthand.

So much waiting – good thing I brought a book!

Once everyone was ready it was “hurry up and wait.”  We all just sat around, chatted, read, snacked from the “Craft Table” (that’s an actor thing – a table with snacks to eat at any time.  Ours had coffee, tea, water, apples, bread, peanut butter, jam, and sour cream and onion rings.  Apparently that’s just an “okay” Craft Table!) and waited to find out what we were doing.

Overall I think they filmed about 6 scenes with the inmate extras.  I should be in 4 or 5 of those – whether or not you can see me/tell who I am remains to be seen.  We didn’t get a lot of direction, but we did get some grumpy directors when things weren’t quite going how they’d like.  They did tell us a few times how we were among the best lot of background actors they’ve worked with.  It was nice to hear.

I have now watched the series (and I loved it, not only because I was there!) and I can tell you where to find me.  In the first episode I am sitting next to the woman who mutters under her breath, has a choking fit, and is escorted out of the dining hall.  Remember that I do not have my glasses on, and I’m stonily eating trying not to be disturbed by the chaos next to me.  Sarah Gadon is sitting immediately behind me in all the eating scenes.

Did you see me?  Leave a comment if you did!

Visit my photo album on my Facebook page for more images from my day.  The photos are from my phone (wasn’t sure if a camera was allowed!), but I got some fun background stuff!

I was very impressed with how much care they gave us lowly background actors.  I was also glad to see some people I knew – and I made some friends, which is always nice.  Have you done any acting of this sort?  Were your days the same?  I’d love to hear other peoples experiences!  And if you know of anyone near to Kingston, Ontario looking for background work (or “real” acting!) I’d love to hear about it!

Update Nov 24/16:  I received yet another email from the Alias Grace background casting company thanking everyone for their hard work and excellent behaviour/work ethic over the week.  It also had an offer to work for the casting company in Toronto on other projects.  I wrote them back saying I’d love to do it, if they could put me on a mailing list so I could see what’s available and whether I could fit it in.  For those of you who don’t know, Toronto is almost 3 hours (to get downtown to where these casting companies are located) from my home – a bit far to go for a 5am call time!  But if there’s a longer project or something very cool coming up I’m going to try to go for it! 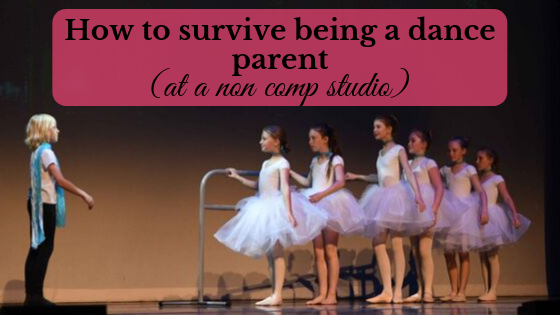 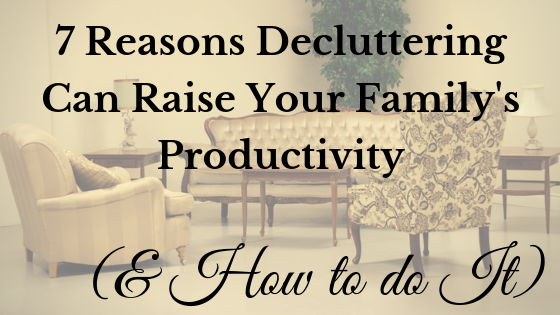 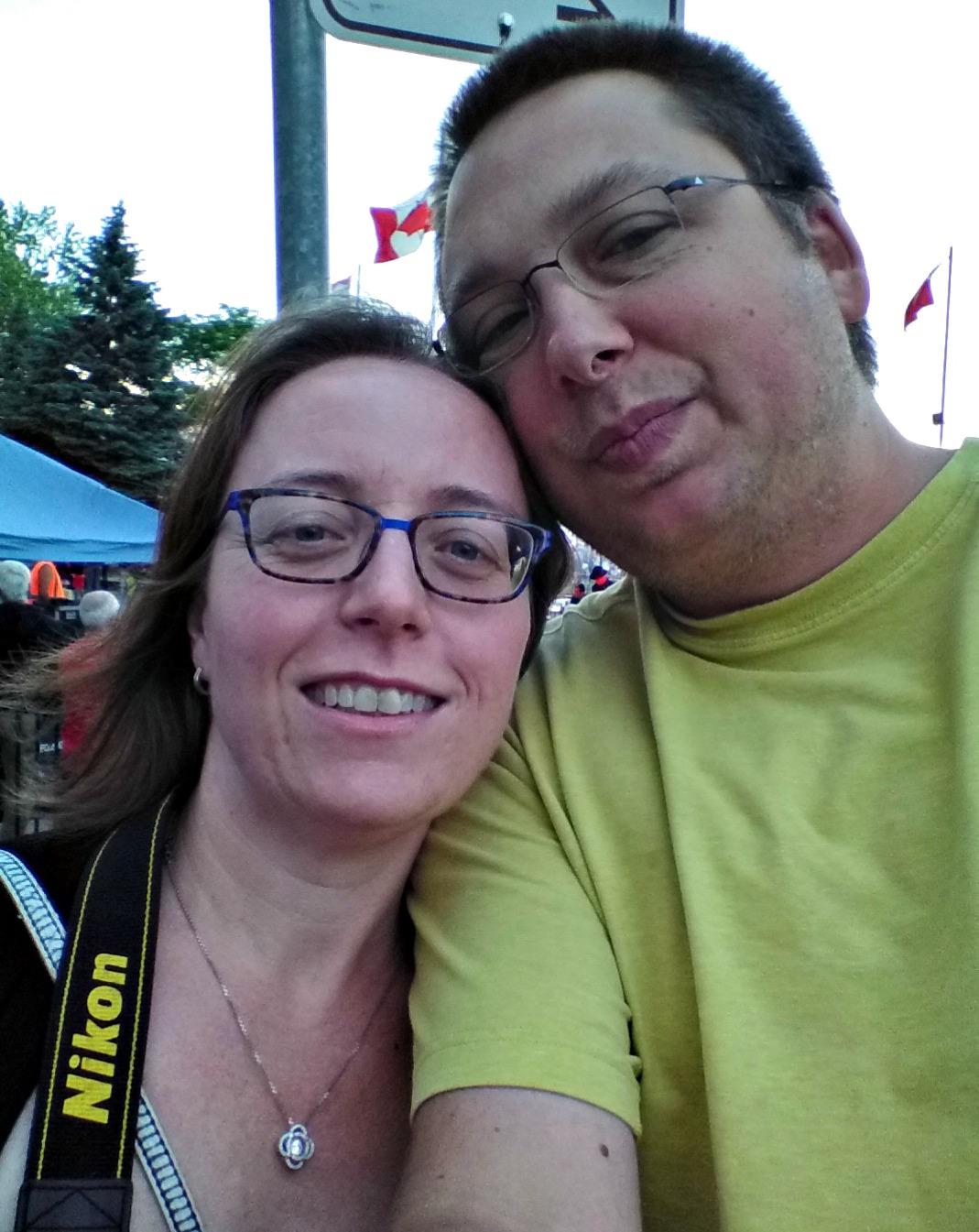 What I Really Do When The Kids Are Away