Bedtime Routines In Our House 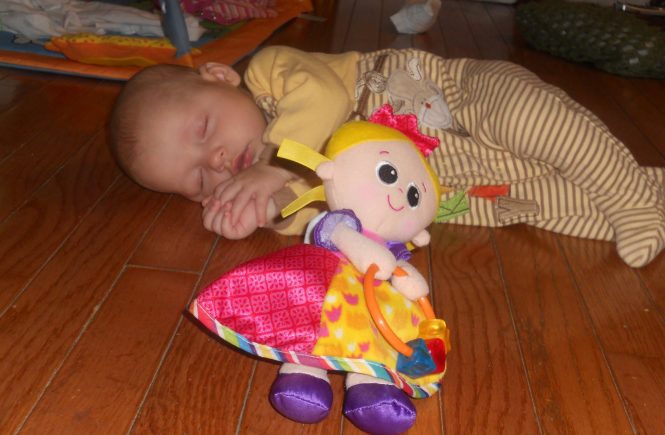 As a Mom, and as a person with a Bachelor of Science in Biology, I am so interested and amazed by the differences in my daughters.  While they look similar, they are almost as different as night and day.  Their personalities, preferences (food especially!), and just general attitudes are so dissimilar.  I had created a post about how much I don’t know about raising these girls.  Today I want to talk about their bedtime routines.

Emma, my first born, was a nightmare for sleep right from the get-go. 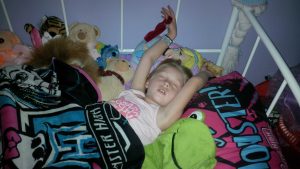 She would only sleep when held, would only fall asleep while nursing and we co-slept so I could get some sleep too.  As we approached her first birthday we decided she needed to get out of our bed so I could get some real sleep when I went back to work.  We did cry-it-out.  I cried almost as much as she did.  It was awful for a week or two but it worked, until she was old enough to demand “more stories” and be in a toddler bed she could get out of.  Her toddler years bedtimes sometimes were an hour or more.  And I’m a softie, especially at bedtime – I don’t want them going to sleep sad or mad!  So would read 100 stories a night.  Okay, maybe only 10 but that’s a lot, especially when there’s a new baby in the house who needs you too!

Now that Emma is almost 8 the bedtime routine is vastly different.  Around the age of 5 she started realizing that sleep is a good thing.  She still (then and now) likes a lot of reading at bedtime, but she can read to herself now.  This really helps me escape her room after only 2 or 3 short chapters in a book.  Before her reading ability increased we had a box under her bed with colouring books and markers that she was allowed to play with, quietly, when she wasn’t ready for sleep, but I was ready to be done reading.  It actually worked well, especially when I was still nursing her sister at bedtime. 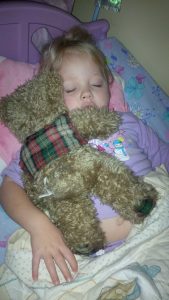 As a baby she fell asleep anywhere – in your arms, in the car, in a crib, or on the floor.  I was so astounded the first time I left her playing on the floor during Emma’s (long, drawn out) bedtime routine, and when I came back she was sound asleep!  (The image at the top of this post is from that night I found her asleep on the floor.  The caption I had on FB said “I took so long with Emma, Rose put herself to sleep. (I’m still not sure Emma’s going to go to sleep…)”)  That perfectly sums up the differences in their sleeping habits!

Rose is now 5 and she still has a very short bedtime routine compared to Emma.  We change, do teeth, and then read one book.  Lately it’s a Chirp magazine – and likely the same one we read last night.  She enjoys the activities almost more than the stories in magazines.  Mazes, find the object pages, and anything she can trace with her finger are her favourite.  And she’ll let me stop reading if she thinks I need to.  When I get a cold I can exaggerate the froggy throat and she’ll tell me to stop reading because “You’re losing your voice Mommy!”  I’m not ashamed to admit I use that to my advantage on nights I’m not feeling so well.

There was a short span of time where Rose would come out of her room 40 times between the end of her routine and the end of Emma’s.  Okay, maybe that’s an exaggeration, but some nights it sure felt like it!  Luckily, Emma is very easy-going where Rose is concerned, and anything that makes Emma’s bedtime longer is a bonus in her mind.  I’m happy to say Rose has grown out of the get-out-of-bed stage.

What time do my girls go to bed?

Emma didn’t have a set bedtime until she was at least 2.  We tried when she was younger to get her to bed so we could have some time before we went to bed but it wasn’t worth it.  Once she started to understand bedtime routines we tried to get her to bed by 7pm as a toddler.  Sadly, that’s a 7pm start to the bedtime routine.  Often we weren’t done until almost 8:00.  That quickly moved to 7:30 start, and then 8 as she got to school.  Now we still try to start her bedtime at 8pm and that works if she’s had a busy day.

I try my best to be out of Emma’s room by 20 after 8, but realistically it’s often 8:30.  Then she gets to stay up reading if she wants (and she always wants to!)  Truthfully I’m not sure what time she turns her light out most nights.  I do know if I hear her stomping around after 9 I go check it out.  I don’t often find her up at that time, and what I heard is often a book falling off her bed!  And I’m pretty sure she’s getting enough rest as she gets up on her own after about 10 hours of sleep.

Rose is vastly different, of course.  She needs a lot of sleep and she tends to be an early riser.  She used to wake up at 6am all the time.  Even when I tried pushing her bedtime later she would still wake early.  Now, at 5 years old, we start the bedtime routine at 7 and it’s rare we aren’t done by 7:20.  Then she sleeps until about 6:30 am, which is great because most mornings I have to get up then anyway.  Especially when there’s school!

Now that it’s summer I’m letting Rose stay up a bit later – starting the bedtime routine around 7:30 (8 on some nights) – and I find she’s sleeping in a bit longer to make up for the late nights.  If the girls aren’t kept busy in the evening (say if they decide to watch a movie after a busy day instead of playing outside) Rose starts looking ready for bed at about 6pm.  I will NOT put her to bed that early because she will be up at 5am once she’s had her regular amount of sleep.  I so don’t want to deal with that!

How are the bedtime routines in your house?

Share with me your household bedtime routines.  I’m curious about other families, their schedules, and how much reading they have to do at night!  What time do your kids go to bed?  Do you feel they get the sleep they need?  Did they go through those annoying stages like mine did (1000 stories? getting out of bed 100 times? getting up crazy early?)  Please comment with your woes and your successes at bedtime! 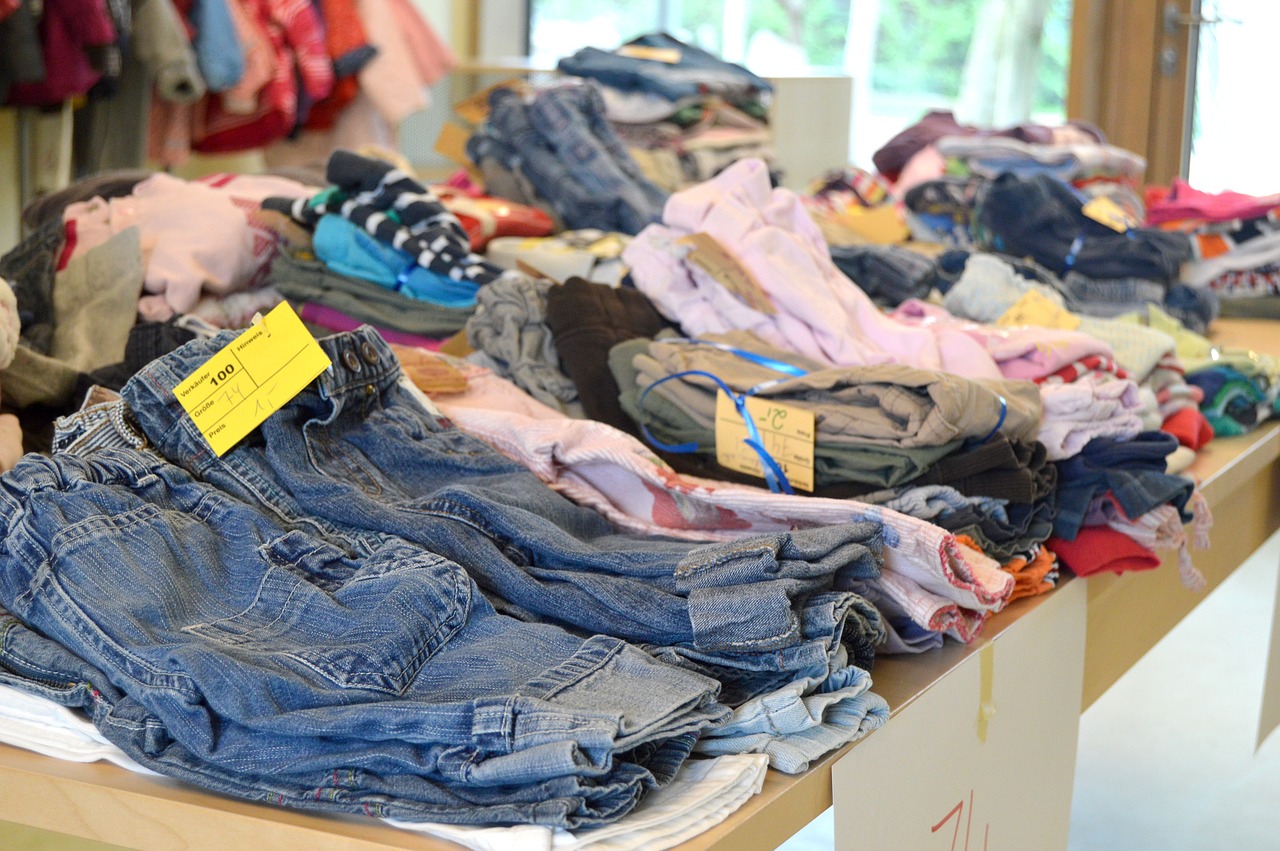 Cut back your consumption with these easy tips 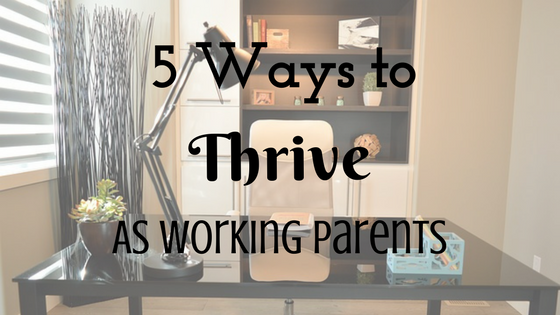 5 Ways to Thrive As Working Parents